I’m not going to lie. Unlike most people, I like the way I look in my fitness gear. It makes me look thinner and I feel stronger and more confident. A lot of that has to do with what I’ve accomplished. If you have seen my Runner Runner page, I’ve accomplished quite a lot in the last 10 years. Gosh, I’m just now realizing as I write this that it’s been almost 10 years since I’ve started this journey as a runner. Who knew that I’d enjoy it so much?

Certainly not me. I disliked exerting myself when I was younger and it never dawned on me that it was a great way to lose the weight that was slowly creeping up on me. Unhappiness and inattention will do that to you. I digress though. This post isn’t about the sad place I was in back then even if it did lead me to the wonderful life I have now.

This post is about getting started again. About 1.5 years ago, I took a spill. Anyone will tell you that spills happen. That’s life. It’s learning to get back up again and keep going that makes all the difference. Both in running and that fun allegory for life as well. This spill however was big and said alot about my running form. They forced me to take a hard look at what I was doing fitness wise and pay more attention to the advice I had been given since starting my journey.

When it happened, I joked that the tree jumped out and attacked me, but the truth is that I don’t have a strong core and it was even weaker when I decided to start running back in 2008. What actually happened is that in the middle of an easy trail run, I stopped paying attention to where I was placing my feet and turned my ankle well enough to sprain it. It was a painful and shocking noise. I have great running friends. Some offered to carry me back to our starting area and all of those near me stopped to ensure I could go on. I hobbled carefully and determined I could walk but soon after I decided I should go home and put my feet up. It was at home that I realized it wasn’t a simple sprain and worried that I had actually broken my ankle. Lucky me – the guy had just left for Japan the day before on a week long work trip so it was me and the pup at home alone to make the determination via Dr Google. Not the greatest resource for anything but worry. Luckily I have a cousin who is a nurse who gave me some sage advice and a Mom who lives relatively close (an hour away) who was able to bring ice for ice packs and crutches to make things easier. And like any good mom she did my dishes, took the pup for a walk and then called after she left suggesting a sit down and scoot down the stairs instead of hop down with the crutches JUST to be safe. I also had a chiropractor visit scheduled a week away.

With a back to back 10k/Half Marathon almost 2 months away, I was concerned about being able to hit my goals. The Doc worked his magic and was optimistic but shortly before the race said he thought I could walk the 10k but wasn’t confident I could do both. Stubborn me tried anyways. Looking back I wonder if the healing process would have been quicker if I hadn’t been stubborn and tried. I finished the 10k painfully and was swept for the first time at mile 4 of the Half Marathon. I knew it was going to happen and was even ready for it. But being ready for it and having it happen are two different things. I cried a lot of tears but a lot of friends in my internet community cheered me on and reminded me of the work I have put in these years since I started. That I was braver than those who had yet to start. 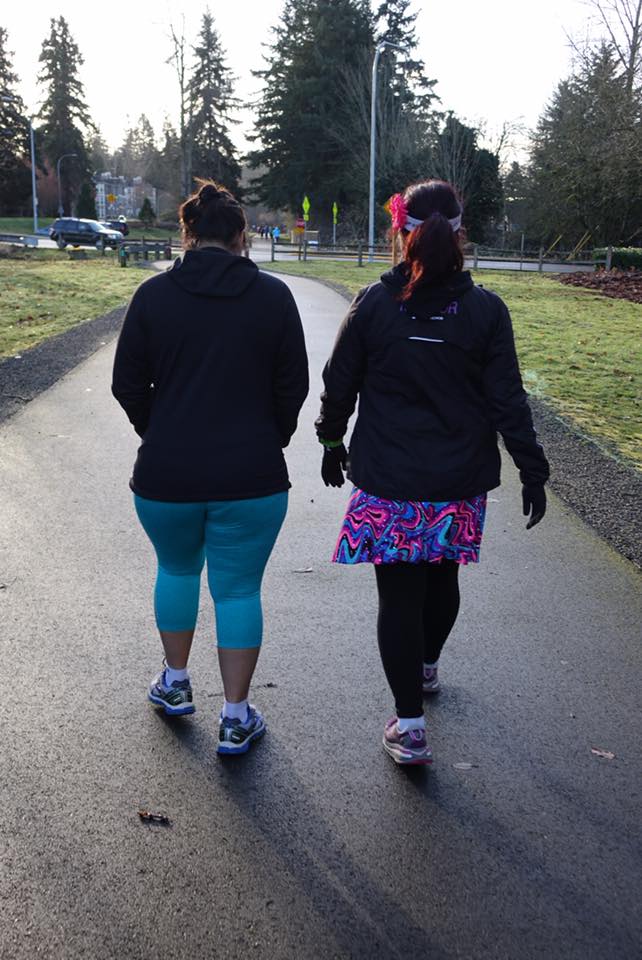 It’s now 1.5 years later and I’m gearing up for my first real training season since that fateful fall. The sweet husband gifted me with a race entry for Avengers Half Marathon this coming fall and as added incentive signed up for it as well. His first Half Marathon! The ankle still has twinges often but an MRI indicates that it’s healed just fine. Tomorrow we head out for our first training run of the schedule I’ve built for us and I’m both nervous and excited.

Spaghetti Squash is another one of those dishes I’ve never gotten consistent results with. Like Acorn (disclosure: I’ve never eaten Acorn Squash) or Butternut Squash, it’s got a hard outer shell and the soft meat inside. I’m too lazy to cut up a butternut squash and typically buy it already in soup form or already cut up and ready to cook. What sets Spaghetti Squash apart though is the fact that the inner meat is stringy when cooked and resembles cooked Spaghetti. 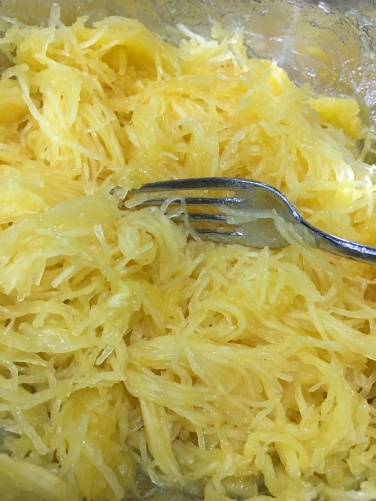 Many people, me included, tend to use it as a low carb substitute for pasta. You can put it under Marinara Sauce and add some meatballs and many people would never know that it was veggie and not pasta. As an added bonus it is high in Vitamin C and low on the glycemic scale. Enough science though since I’m not a nutritionist and this is more about pressure cooking and not science.

You can cook Spaghetti Squash in the oven or the microwave. I don’t like using the oven myself because you not only have to wait for the oven to pre-heat, but it takes an hour to do so. I’ve always cooked it in the microwave and come out with mixed results. Sometimes 10 minutes was perfect, other times it took 30-some minutes to get it to the perfect consistency.  And by perfect I mean, easy to fork apart into pieces that resembled angel hair pasta. Anything less than perfect and it feels like you’re chipping away at an ice block. Obviously not the desired result.

This is one of the things I’ve been wanting to try since I first got my Instant Pot. I popped it in whole  and set my pot to 10 minutes on manual and then it was supposed be 7 minutes “rest” but I didn’t take the lid off until 10 minutes. I can’t tell you how excited I was to open the lid and find that the skin peeled off like butter. The only thing I will need to remember for next time is to cut in half before peeling so the seeds are easier to remove. But even that was awesome – When cooking in the oven or microwave, cutting into a spaghetti squash took some strength AND you have to be careful not to hurt yourself. This wasn’t an issue in the instant pot and in fact, the skin cracked while cooking! While I found this ability awesome, it also made it harder to separate the seeds from the meat of the squash. Cutting it in half would probably make that easier, but either way it’s MUCH quicker than the oven option AND you get more meat off of the skin.
Another nice thing is that once your squash is ready, you can then keep the Instant Pot on and use the Meat Setting to brown your hamburger for meat sauce. Or be adventurous and try other things. 🙂  What type of things do you like Spaghetti Squash with? 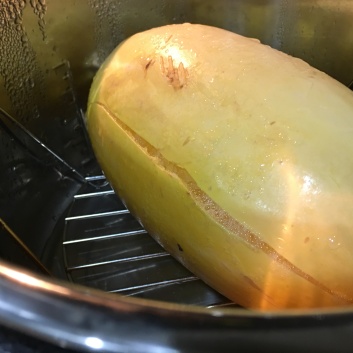 Boiled eggs are probably one of the first things people learn when they learn to cook. One of the easiest and yet still sometimes troublesome.  Cracked shells, eggs that don’t peel cleanly thus looking “ugly”, off-center yolks, too much grey (sulpher) on the yolk, smelly eggs, the list goes on and on.  As you grow older and your cooking repertoire grows, you dissect the process learning different tricks and ways to cook them trying to get “perfect” every time. Or at least I did.

Tricks like adding salt or baking soda to the cooking water.  Specific cooking times followed by ice baths for varying specific times. Oh yes, and then there is the trick of piercing the shell but not the inner lining to create a pocket of air and water between the egg and the shell. Like many, I found some success but never consistent success with any of these methods.

After I first posted pictres of my first attempt using my pressure cooker to “boil” eggs, people asked why? It wasn’t any quicker to the methods we grew up with. I had to explain, though, that what I found is that I had to monitor my eggs less and also use less water. Oh yeah, and those consistent results I’d been looking for. Not on that first try though. This picture shows you that first try. The bottom squished egg? It was peeled as soon as I pulled it from the pot. (Another plus – being able to handle the egg without tongs sooner)  It was definitely cooked, but the whites were definitely rubbery in consistency. I put the other 5 eggs in that small batch in an ice bath as soon as I could. 5 minutes later, I got that perfect looking one at the top. Both eggs peeled super easy without problems while also having that perfect look we all want for dishes such as deviled eggs. The next batch then showed me that the ice bath wasn’t even necessary, just time to cool a bit more.

Time from start to finish:  <15 min from the time I sealed the pot.

Growing up, Short Ribs were this long cut of meat with 2, maybe three small bones in them. They were grilled and served at barbecues and potlucks all summer long and the best, juiciest, most delicious thing on your plate. After I moved out of my parents home, I continued to buy them from the local korean market and cook them for friends who

enjoyed them just as much as I did. Then one day I happened upon these. They were a big hunk of meat and one big bone. After I looked at them for a while, I realized they were the
same thing, just cut differently. Some research told me that this cut also took WAY longer to cook! Auwe!  2 ½ – 8 hours for them to cook to a tender state? Not my style of cooking! I grew up thinking things should be done quickly or in a set it and forget it style. Made getting other things done in the house that much easier.

Pressure Cooking cuts that time down so I took the recipe I grew up using for short ribs and tried it with this cut. Imagine my delight when I found it even better and more juicy than the short ribs I grew up with! Bonus that the bone just falls right out. The only downside to using this recipe with this cut is that this cut is much fattier than the thinner versions. I’ve got plans to try other recipes with this cut so keep watching for those.

This recipe, like I said, is one I grew up with. Good on short ribs, bulgogi, chicken and probably many other proteins. An all purpose teriyaki recipe if you will. Mix ½ cup Shoyu (I use Aloha Shoyu), ½ cup water, 2T sesame oil, 3T (about) Honey (or ¾ cup Sugar), 1t minced Garlic. mix well. Add ribs to pressure cooker in one flat layer fat side down.. This should be about 2-3 lbs. Pour the sauce over it and seal the lid. Set it for Manual High Pressure, 50 min, then release the pressure immediately.  Enjoy! 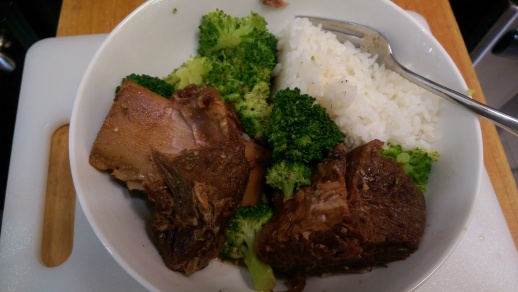